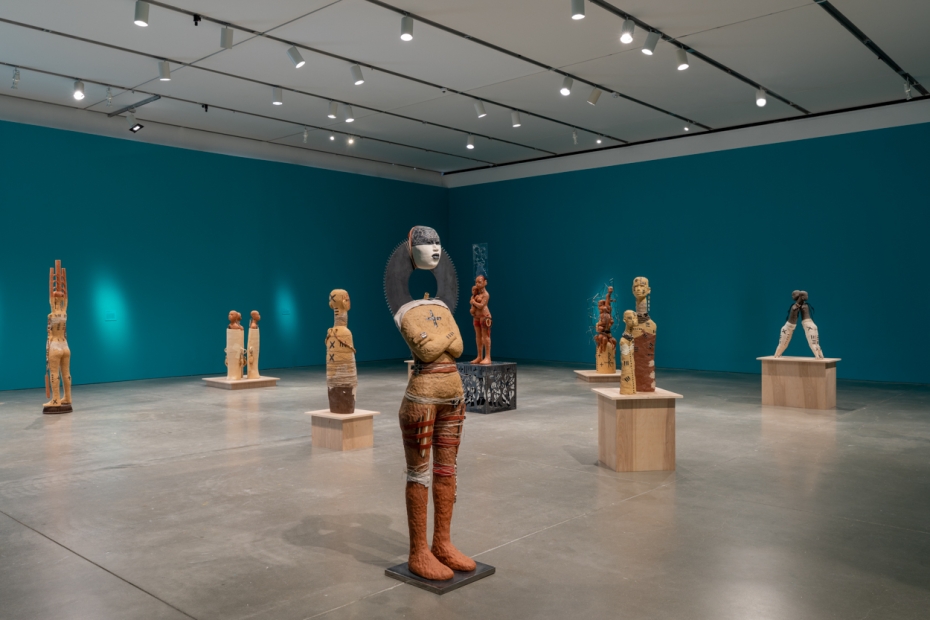 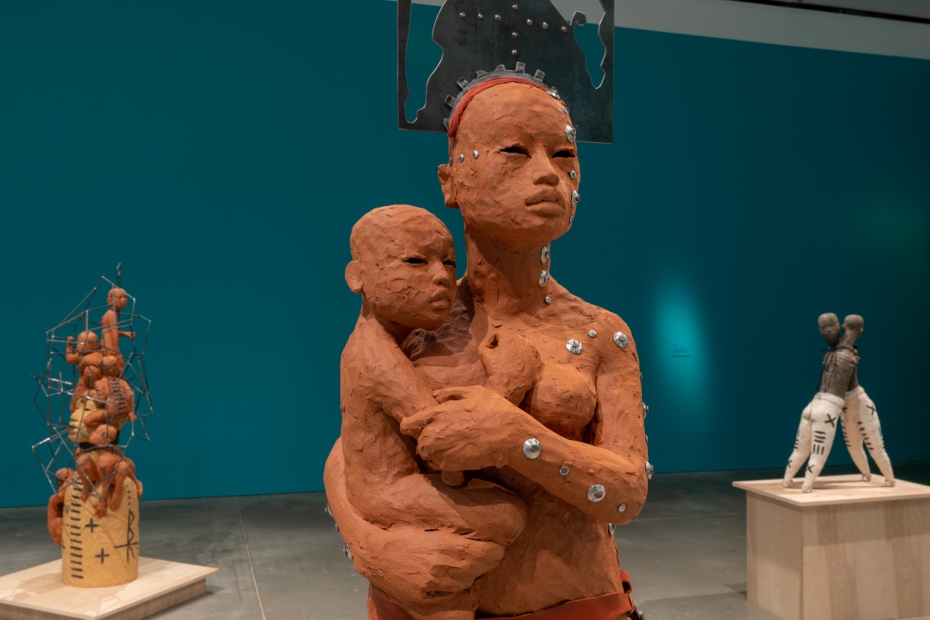 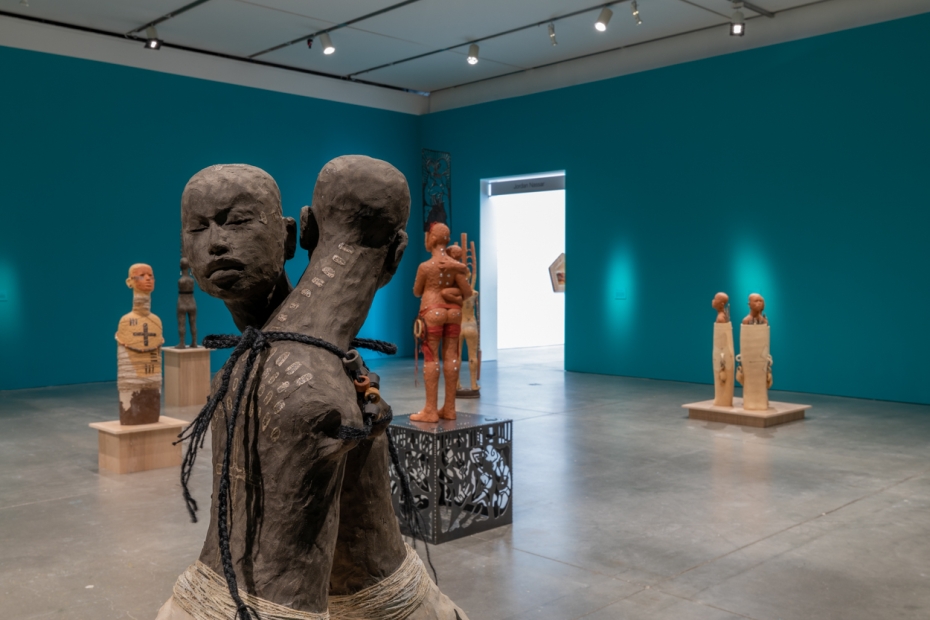 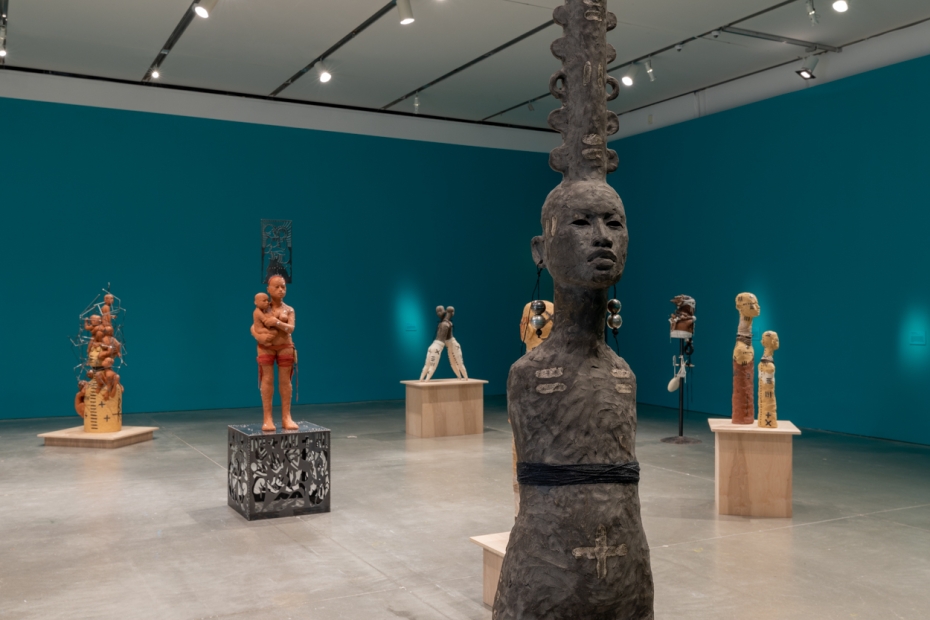 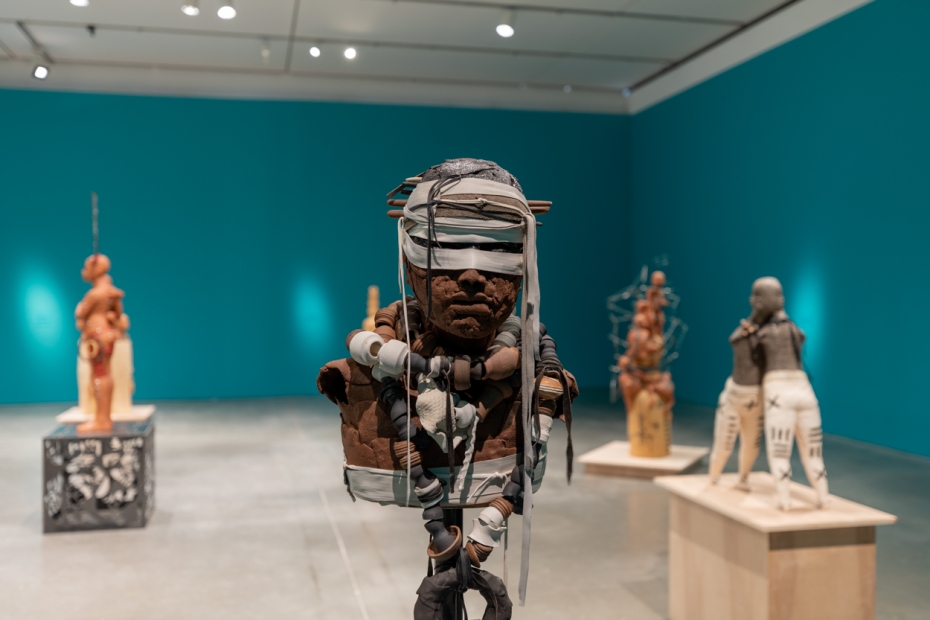 The artwork of Rose B. Simpson (b. 1983 in Santa Clara Pueblo, NM) encompasses ceramic sculpture, metal work, performance, installation, writing, and automobile design, offering poignant reflections on the human condition. Her ceramic figurative sculptures, which range from intimately scaled works to monumental standing figures, express complex emotional and psychological states, spirituality, women’s strength, and post-apocalyptic visions of the world. Simpson is part of a multigenerational, matrilineal lineage of artists working with clay. She combines processes of producing clay pottery in practice since the 6th century with innovative techniques and materials, connecting tradition and knowledge of her own place in the world today. For Legacies, Simpson’s signature themes and approaches to working with clay are brought together in a focused open floor plan presentation of her ceramic sculptures, including individual figures, pairs, and groupings, and new works made for the exhibition.

The artwork of Rose B. Simpson (b. 1983 in Santa Clara Pueblo, NM) encompasses ceramic sculpture, metal work, performance, installation, writing, and automobile design, offering poignant reflections on the human condition. Her figurative ceramic sculptures — which range from intimately scaled works to monumental standing figures — express complex emotional and psychological states, spirituality, women’s strength, and postapocalyptic visions of the world. Simpson is part of a multigenerational, matrilineal lineage of artists working with clay. She combines ancient methods of producing clay pottery (dating back to the sixth century) with contemporary, innovative techniques and materials, connecting tradition and knowledge with her own place in the world today.

Legacies is a focused presentation of Simpson’s ceramic sculptures dating back to 2014, with an emphasis on more recent and newly created work, including individual figures, pairs, and groupings. For Legacies, Simpson’s signature themes and approaches to working with clay are brought together in an open floor plan gallery. These 14 often androgynous sculptures incorporate metal, wood, leather, fabric, jewelry, and reclaimed materials, and are frequently marked with a “+” or an “×,” symbols for direction and protection, respectively. Many of Simpson’s works consider themes of motherhood, intergenerational relationships, or personal growth, while others stand as safeguards against legacies of violence. Rooted in ideas of nurture and repair, each sculpture is heavily worked by hand, featuring a richly textured surface that conveys Simpson’s depth of engagement with her subjects and her expertise in giving form to clay. Through such evocative, tactile sculptures, each with their own commanding presence, Simpson’s work is intended, as she has said, “to translate our humanity back to ourselves.” 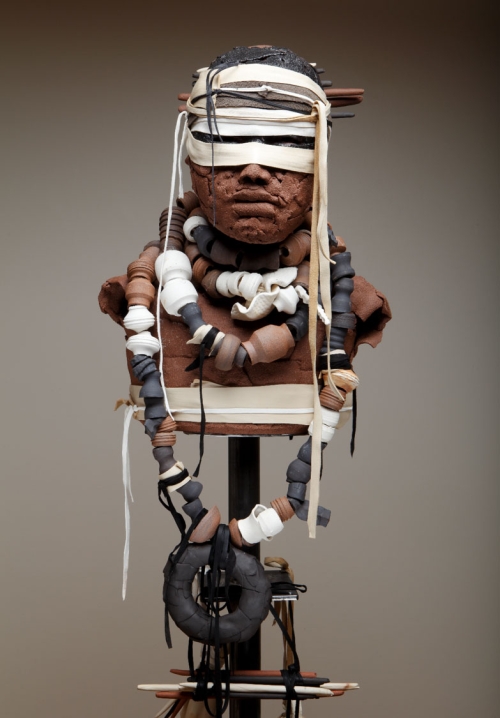 One of a series of sculptural ceramic busts created to access power from the cardinal directions, Directed South is a warrior-like, protective figure dressed for empowered survival, including a leather mask and jewelry made of clay and metal. A postapocalyptic aesthetic recurs in Simpson’s work as an acknowledgement of climate emergency and in recognition of how Native American people have already survived systematic decimation. For Simpson, there is a sense of liberation in acknowledging this position, in which social norms are erased, identities are unfixed, and how we adorn ourselves can be beautiful and empowering. Perhaps as a way to amplify these narratives, Directed South is mounted on top of a structure resembling a microphone stand, upon which the figure bears witness and helps ensure survival. 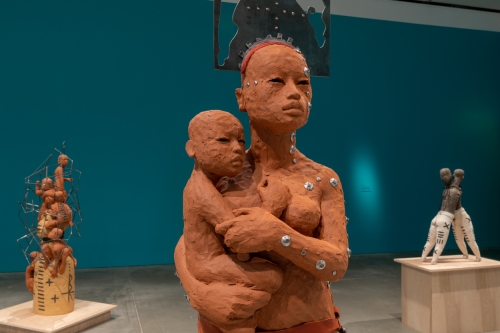 The ceramic mother figure in Genesis Squared stands holding her child close to her body, with feet planted firmly atop an ornately cut metal pedestal depicting historical traumas inherited by matrilineal lines. Another laser cut-metal plate (this one, showing an intimate scene of mother and child embracing, displays the mother’s convictions), balances on top of her head and references the traditional tablita headdresses worn in Pueblo ceremonies. Here, the mother is conscious of both a troubled past, and an empowered future, to hold the prayer of healthy mothering in the present. 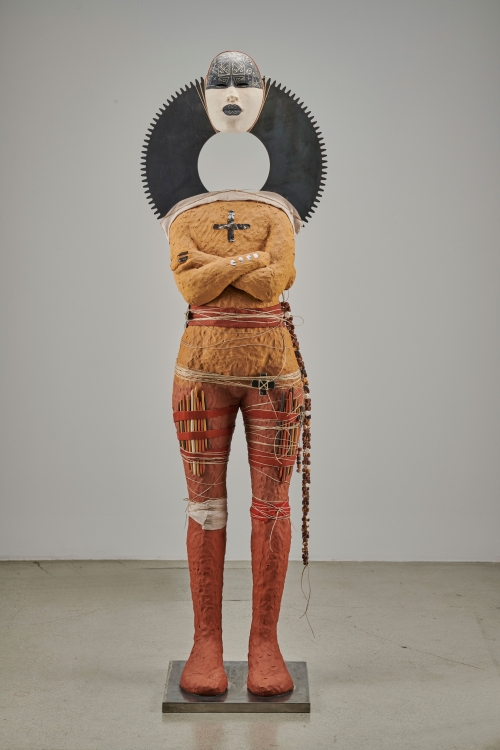 Root A is one of a pair of works Simpson made as part of an investigation into the role of boundaries in society. For Simpson, boundaries — or a set of rules followed by people in society — are often tainted by sexism, racism, or other prejudices that are part of patriarchal systems of control. Root A is imagined as a sentinel-like standing figure with crossed arms who is firmly grounded to the earth, representing a figure who enforces healthy boundaries and stands for justice. The figure’s face is intricately carved and fixed atop a blade-like gear encircling the shoulders. A clay spine hangs from the figure’s hip, with stars and clay rods as objects of direction and protection, invested with power. There is a void where the figure’s voice box would be —the head floats without a neck and the gear appears as if it is rotating. For Simpson, this void is a “ready thoroughfare for the voices yet to be heard,” and Root A guards healthy boundaries “to empower, strengthen, and give active and instrumental voice to the silenced.” 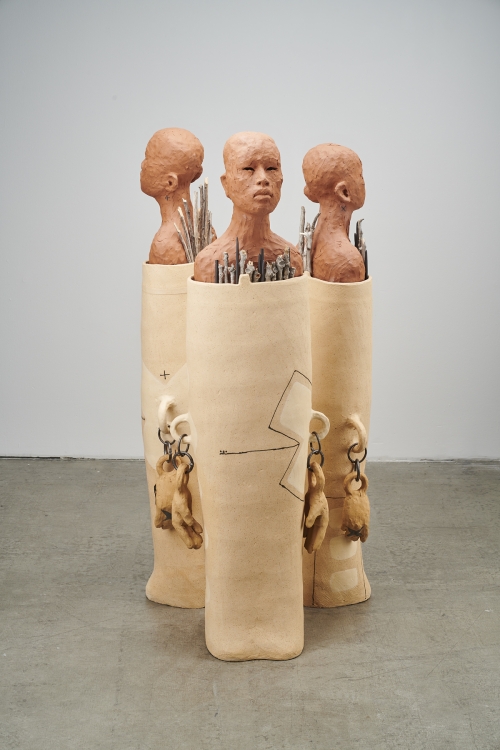 The Remembering is a group of three tightly wrapped figures in sacks, who appear to lack agency and bodily autonomy. The work was made in response to so-called American Indian boarding schools, established in the United States with the white-supremacist objectives of civilizing or assimilating Native American children and youth by denigrating their culture and forcing them, often violently, to relinquish their language and spiritual beliefs. Intended to reflect on the living legacies of the boarding schools as tools of racial violence and forced assimilation, the three figures gathered in The Remembering stand in for the lost children who are the tragic victims of such atrocities and grave injustices. Positioned closely together, these figures actualize the truth that they were never alone, and are not alone now. 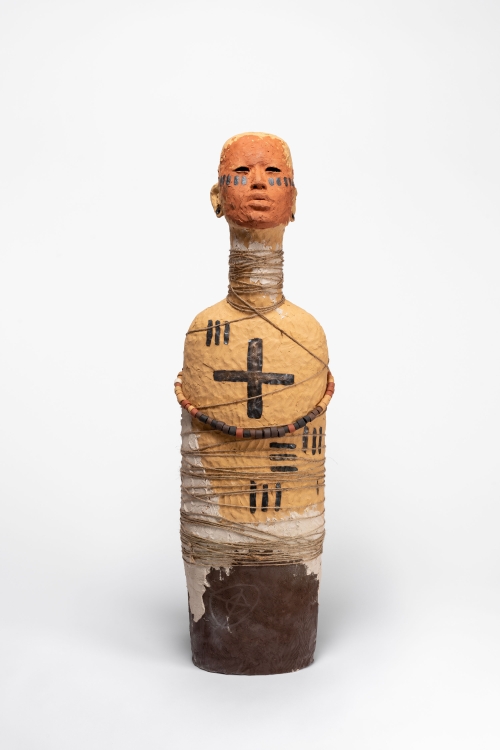 Tightly bound with twine encircling its body, Considerati 1 is a quiet rumination on how giving too much consideration of how our actions affect others can at times take us out of the present moment. The sculpture aims to pose the questions: “What is considerate, who is to decide, and according to whose judgement?,” exploring the fraught terrain of self-censorship and the policing of consideration. 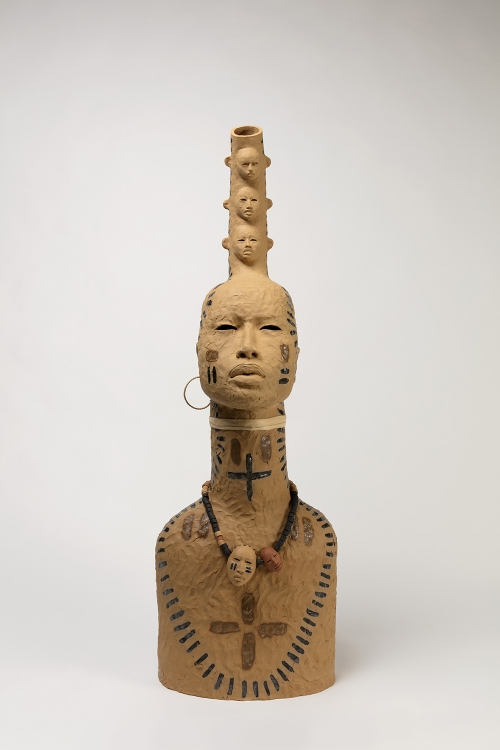 Reincarnation II is a bust featuring distinct jewelry and bodily markings, with a pipelike form extending upward from its head. Three faces are emerging from the form, with two more as pendants on a necklace made of ceramic beads. These five faces signal the presence of ancestors (from both past and future) in our lives, and how each of us carries as part of ourselves those who came before us as well as those who will follow. 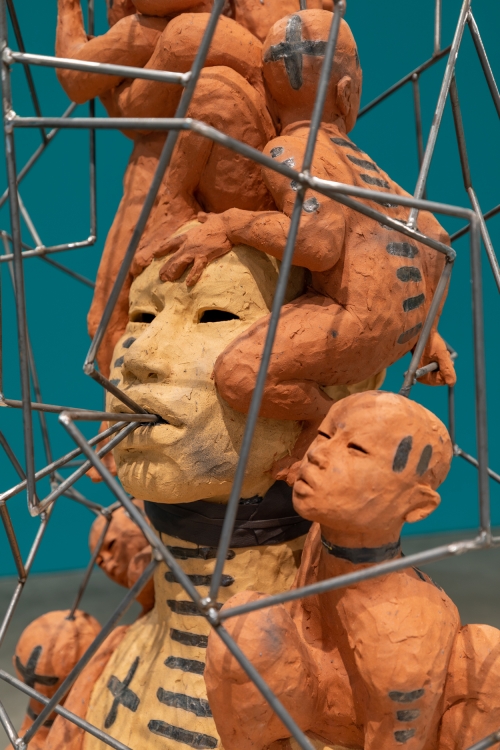 In Storyteller, an intricate metal armature materializes from the mouth of a large ceramic bust. The armature contains within it a group of seven smaller figures encircling the bust, who cannot escape the containment of the armature. Indeed, the armature enters the bodies of each of the smaller figures, suggesting that the storyteller breathes life into them even as they are held inextricably fixed by the story. 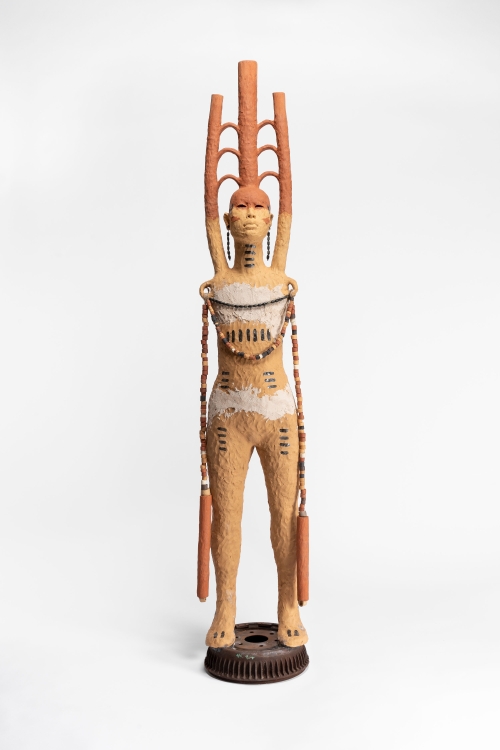 Part object, part figure, Truss is an armless figure with unique beaded jewelry standing perched atop a break drum. A truss is an engineering assemblage, typically made of three conjoined members in the shape of a triangle, or combination of triangles, to create a rigid, supportive structure. Here, the six arches of Simpson’s Truss recalls an aqueduct and grows from the figure’s head and shoulders. This particular truss suggests a kind of support for the figure who wears it, an extension of the body through which there is a direct movement of forces from the individual to a higher form of consciousness. 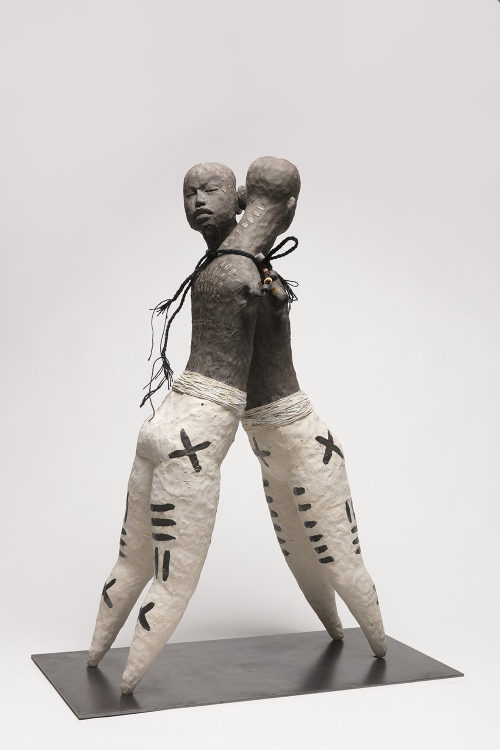 In Brace, two leaning androgynous figures are locked in an evocative embrace, mutually dependent and joined together with knotted twine adorned with clay beads. The figures are armless with eyes closed, as in many of Simpson’s sculptures, with the twine tied through hoops where the arms would be. A rumination on the tenderness of relationships, Brace is a reminder of the vulnerability that comes with love and trust. 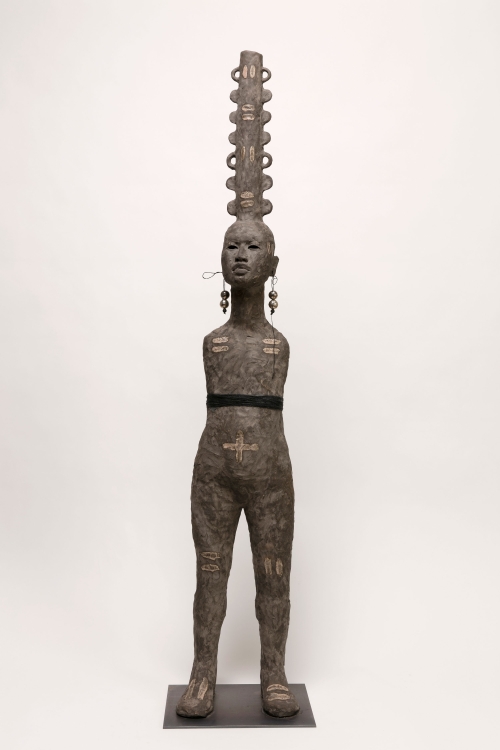 Heights I (original) is an androgynous standing figure, child size in scale, with a series of cuplike vessels growing upward from its head. The armless figure is adorned with silver bell earrings, with holes for eyes to create a witness point for the being to find direction. Here, the body is a vessel whose upward reaching suggests personal growth and the impulse to aspire to new levels of consciousness. 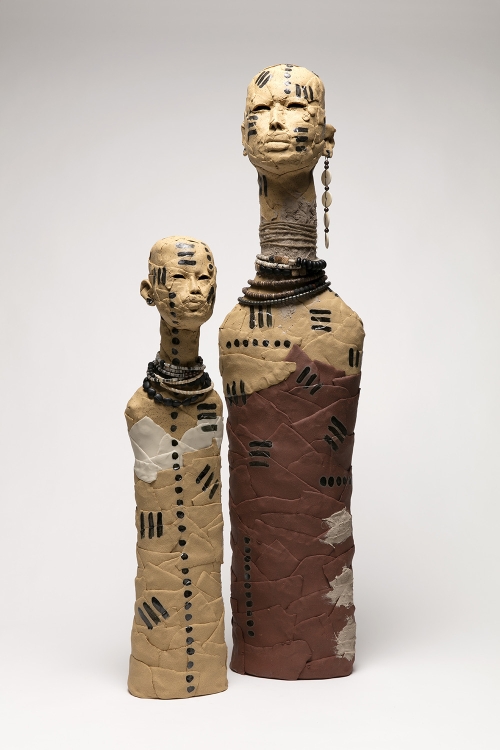 Legacy, the work that gives the exhibition its title, is a two-part, mother-daughter sculpture made using a technique Simpson refers to as “slap-slab,” involving repeatedly throwing clay against the floor on a diagonal until it is very thin. Built up of overlapping layers of thin clay, these busts are imbued with a sense of watchful vulnerability, conveying the shifting complexities of motherhood as your child grows older and becomes increasingly independent.

Rose B. Simpson: Legacies is supported in part by the National Endowment for the Arts. 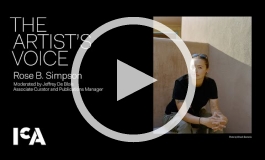 The Artist’s Voice: Rose B. Simpson 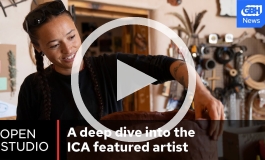 Rose B. Simpson shapes stories in clay and steel