This Will Have Been: Art, Love and Politics in the 1980s

The Museum of Contemporary Art Chicago has organized This Will Have Been: Art, Love & Politics in the 1980s, an ambitious presentation that represents the diversity and complexity of art produced during the 1980s—from the Pictures generation to neo-expressionism, from the rise of photography to the emergence of abject art—offering a historical overview while situating our contemporary moment within the history of art of the recent past. The 1980s were a transformative decade in the history of art, music, and politics, beginning with new regimes of world power personified in the United States by President Ronald Reagan, in the United Kingdom by Prime Minister Margaret Thatcher, and in Germany by Chancellor Helmut Kohl. They ended, significantly, with two equally dramatic events: the fall of the Berlin Wall in 1989, and the repudiation of the Reagan-Thatcher era signaled by the elections of Bill Clinton in the United States in 1992 and (eventually) of Tony Blair in England in 1997. This Will Have Been re-examines this tumultuous decade at a remove of nearly 30 years, contending that over the course of the decade, the art world navigated a series of ruptures that permanently changed its character. Reaganomics led to a dramatic expansion of art as a luxury commodity, while conversely, the rise of postmodernism shifted artists’ sense of their role in society and further questioned the very status of representation as such. People of color, women, and gay artists actively sought an end to cultural hegemony; photography challenged the primacy of painting and sculpture; the toll of the AIDS/HIV crisis permanently politicized a broad cross-section of the art community; and the fall of the Berlin wall and the rise of globalism sounded the death knell of New York’s status as the sole “center” of the art world.

The art produced in the 1980s veered between radical and conservative, capricious and political, socially engaged and art historically aware. This Will Have Been not only provides viewers with an overview of the artistic production of these heady days—some of it now canonical and some of it almost forgotten —but it also imparts the decade’s sense of political and aesthetic urgency by placing many of the decade’s competing factions in close proximity to one another.

The exhibition is divided into four sections: The End is Near toggles between discourses of the end of painting, the end of the counter culture, and the end of history. In the Democracy section we see a renewed interest on the part of artists with working in the street; the burgeoning awareness of the importance of the mass media (particularly television); the rise of Central American artists and artists of color to increasing prominence; and the pervasive commitment to the political that shaped the period. The section titled Gender Trouble elaborates upon the implications of the 1970s feminist movement with work that expanded our sense of societal gender roles, and smuggled in new ideas about sexuality and figuration. Finally, there is a section called Desire and Longing in which artists working with appropriation techniques are held in relation to the emergence of queer visibility brought on by the AIDS crisis. By crossing these wires the exhibition hopes to suggest that despite the claims of cynicism or overarching irony sometimes leveled at the work of this period, often what we find are artists struggling to articulate their wants, needs, and desires, in an increasingly commodified and seemingly impenetrable world.

SCREENING IN THE GALLERIES: 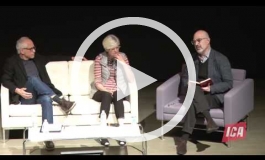 This Will Have Been Tote

This Will Have Been Catalog