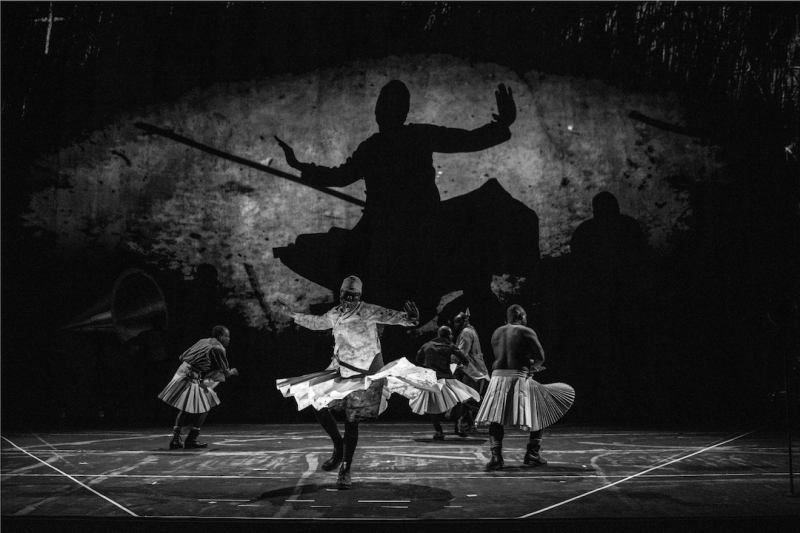 The Bite of a Word

For over five decades, William Kentridge has made wide-ranging works that examine the paradoxes of colonialism, particularly in South Africa. His multidisciplinary practice aims to recompose our understandings of the past, emphasizing, as he says, “what we’ve chosen not to remember.”[1] Some of the most revealing characteristics of colonialism in Africa were on display during World War I when, “more than ever before, [colonial] subject peoples were called upon to defend the very institutions of their subjugation: the European empires.”[2] The African theater of World War I is largely overlooked in popular histories of the war told in the U.S. and Europe. [3] Still, Africa was at the heart of the war in the eyes of many. Less than a year after the outbreak of war, sociologist W.E.B. Du Bois wrote, “in a very real sense Africa is a prime cause of this terrible overturning of civilization which we have lived to see.”[4]

In Du Bois’s estimation, both the radical shifts in European economies and politics as well as the Berlin Conference, held on November 15, 1884, were root causes of the Great War. The Berlin Conference marks one moment in the Scramble for Africa, the rapid and violent invasion, occupation, division, and colonization of African territories by European colonial powers, many of whom had already colonized parts of Africa at that point. In 1870, before the Berlin Conference, ten percent of Africa was under European control. By 1914, that percentage had increased to ninety. For Du Bois, “the ownership of materials and men in the darker world is the real prize that is setting the nations of Europe at each other’s throats today.” [5] The purpose of the Berlin Conference—“to apportion the riches of Africa among the white peoples”[6]—laid bare the inevitability of a large-scale war to preserve control of newly expanded colonial territories in Africa. 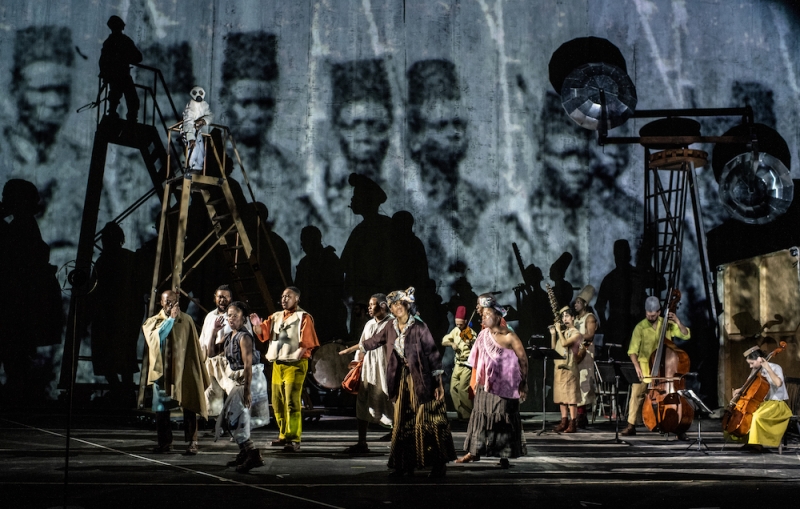 Kentridge acknowledges several redolent points of departure in conceptualizing The Head & the Load (2018), a large-scale theatrical production addressing the history of African porters conscripted into service for German, British, and French colonial powers during World War I. One of the “energies” that propelled the project was, according to the artist, “a frustration at my own ignorance…about the war in Africa”[7]—not knowing about the extensive contributions of African soldiers and porters in both Africa and Europe or the extent to which the war was waged on the continent itself. For the artist, “All Quiet on the Western Front, stereoscopic photographs of the Flanders trenches, the great English war poets, took all my air.”[8] Kentridge recognizes “an ignorance I am complicit in,” by assuming that such representations of the war were indicative of its full scope, even as he notes the deliberate erasures that led to his assumptions: “a conscious effort by those in power—the colonial powers—to silence voices, to hide history.”[9] “What we’ve chosen not to remember” is at times shaped by a complicity in not seeing the deliberate erasures in the historical record before us. 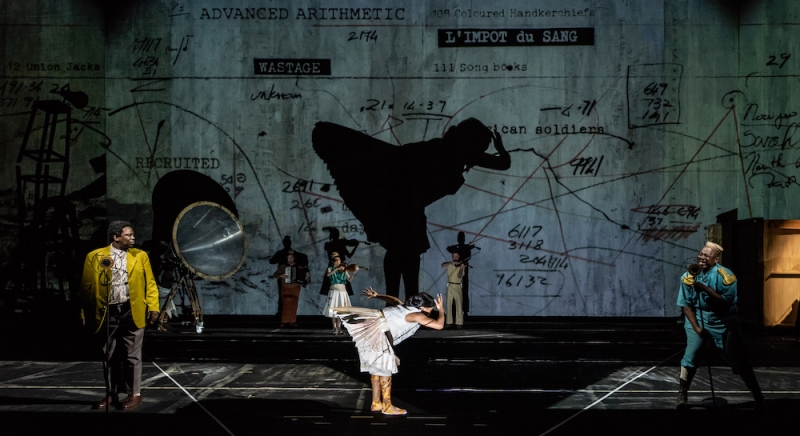 Kentridge arrives at another point of departure through a coming to terms with how one relates to history, and an understanding of history itself as fragmented. According to his interpretation, collage is uniquely suited as a medium to bring “different fragments together to find a provisional history.”[10] Kentridge marshals a full arsenal of artistic approaches—drawing, print, animation, and projection, as well as performance, dance, and sound—in service of a capacious collage-based aesthetic for a particularly fragmentary historical subject. 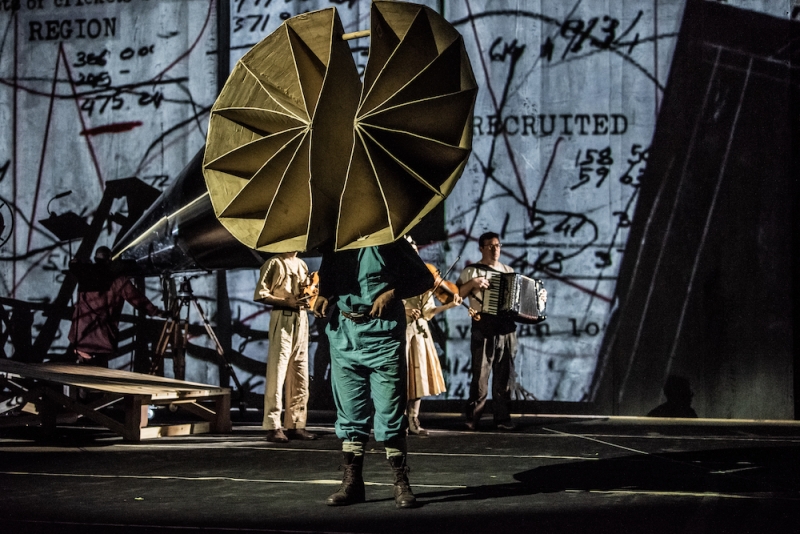 The title for The Head & the Load comes from a Ghanaian proverb that reads, “the head and the load are the troubles of the neck,” which here recalls both the physical weight of goods, services, and weapons that porters—men, women, and children—carried for colonial soldiers, as well as their place in a global war that violently remade Africa’s borders. The Head & the Load employs Kentridge’s signature tropes of procession and shadow play, as well as approaches and themes developed in two of his earlier projects: Triumphs and Laments (2016) a five-hundred-meter-long frieze along the banks of the Tiber River in Rome, and a production of Alban Berg’s Wozzeck (1914–22), an opera about the everyday lives of soldiers and townspeople in a rural German-speaking town, made for the Salzburg Festival in 2017. [11] In Rome, Kentridge animated the frieze through “the use of shadows cast on the wall, shadows both of the performers but also of cut-out shapes they carried—of faces, of objects, of historical moments—literal loads and metaphorical loads.” [12] Kentridge’s treatment of Wozzeck as a “premonition of the First World War” allowed ideas about the war to surface. These ideas then carried over into The Head & the Load.[13] 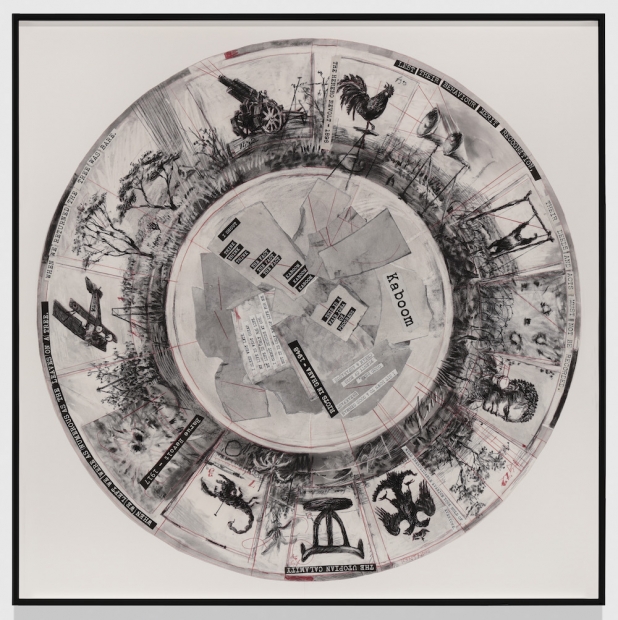 Following an invitation to imagine a work for the Park Avenue Armory, the width of the stage became another starting point for The Head & the Load, which was performed there in December of 2018. The stage was more than 180 feet in length within the Armory’s 55,000 square foot Wade Thompson Drill Hall. The operative idea was to allow different musical traditions, European and African, to occupy each end of the stage, with “a space of negotiation in between.” [14]  Strategies drawn from Dada—an art movement formed during World War I in Zurich in response to the war—occupied the center, namely “the cut-up, the illogical.” [15]  Fragmentation and the cut-up allow for the illogical to be the work’s logic, an opera without a script or a libretto. All of Kentridge’s large-scale productions are given form through extensive workshopping and collaboration. The workshops are meant to foster an environment of improvisation where contradictory impulses emerge and are allowed to enter the work. The Head & the Load began where workshops and preparations for Wozzeck ended: with a team of designers, performers, and musicians, along with elements not used in the production of Berg’s opera.

Without a traditional script, the cut-up technique ensured that the collage aesthetic extended also to the narrative trajectory of the piece. Fragments of the writings of Reverend John Chilembwe, philosopher Frantz Fanon, and artists Tristan Tzara and Kurt Schwitters, are incorporated, as are parts of Karl Kraus’s satire The Last Days of Mankind (1918), passages from a Swahili phrase book, lists of items sent to African troops by the Committee for the Welfare of African Troops in Europe, and more. John Chilembwe’s letter “The voice of the African native in the present war,” written in 1914 to the Nyasaland Times but never published, is in some ways a primary text. According to Kentridge, “a copy of this letter has sat in a box in my studio for the last forty-five years, waiting its moment to be used.” [16] Chilembwe writes, “In times of peace, everything for Europeans only, and instead of honour, we suffer humiliation with names contemptible. But in time of war, it is found that we are needed to share the hardships, and shed our blood in equality…. The poor Africans who have nothing to own in this world, who in death leave only a long line of widows and orphans, and utter want and dire distress, are invited to die for a cause which is not theirs.” [17] 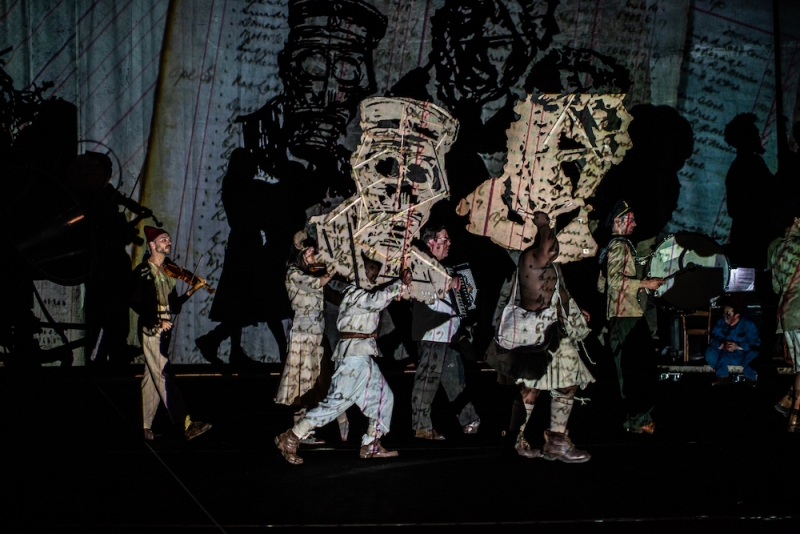 After working with Kentridge on Triumphs and Laments, Philip Miller, a longtime collaborator, and Thuthuka Sibisi were invited to imagine the multilayered sonic landscape of The Head & the Load. The rousing orchestral score and sound design follow the logic of collage as well, with various sonic elements such as military drills, animal sounds, and selections made from African and European musical traditions overlaid, at times evoking the cacophony of sound in war. The dancer Gregory Maqoma’s spasmodic choreography gave physical form to the tortured movements of shell shock—the post-traumatic stress disorder many soldiers were afflicted with during the war—realized by performers whose presence on stage was meant to express physically the paradoxes of colonialism. 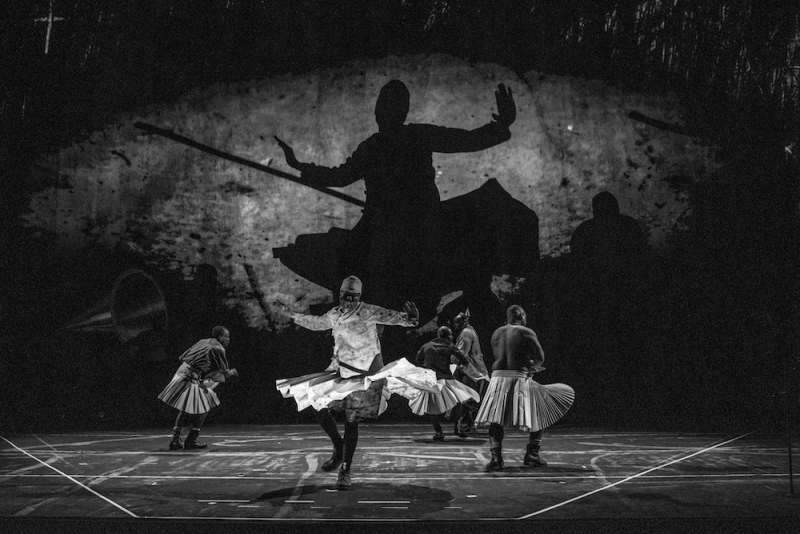 At the heart of The Head & the Load, like many of Kentridge’s works, are procession, silhouettes, and shadow play. To intimate the history of the African porters conscripted into service by colonial powers, the performers carry shadow cut-outs. Their presence is amplified through lighting and projection. Their bodies on stage also appear as larger shadows on screen, incorporated into images cast onto heavy military tarpaulins suspended at the back of the stage. As in many of Kentridge’s works, the shadow figures bear significant metaphorical weight. In the context of The Head & the Load, the shadows signify the anonymous porters whose presence here sheds some light on the paradox inherent in their deliberate erasure from the historical record. 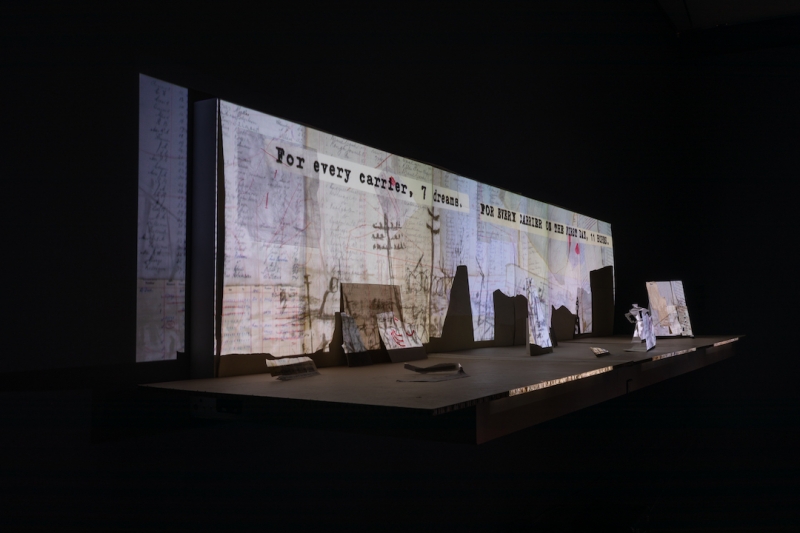 As Kentridge often does following a major theatrical production, he created the sculptural video installation KABOOM! to embody the theatrical intensity of The Head & the Load at gallery scale. A three-channel video projected onto sculptural paper props and found objects displayed on a scale model of the stage, KABOOM! features repurposed archival documents, animated drawings, cut-up pieces of text and colonial maps, and footage taken from The Head & the Load. The narrative is conveyed primarily through cut-up language and collaged images appearing in succession, approximating the sequence of the stage production in a work in which the screen itself is the primary site of action. Silhouettes of porters bearing heavy loads labor across meticulously rendered, war-ravaged landscapes, as other elements from the dramatic arc of the production are distilled into incisive moments on-screen.

The contraction from the monumental scale of a sprawling theatrical production to a concise, concentrated work allows for a particular encapsulation of KABOOM!’s distinctive themes. The plight of anonymous porters, enacted through live performance in The Head & the Load, is here given voice through the interspersed fragments of text and disembodied speech that illustrate their situation. The word “KABOOM!”—a striking onomatopoeia, a biting word—is introduced at the beginning of the work alongside the phrase, “This is a fair idea of progress,” which registers a rupture that troubles the possibility of such an idea to begin with. This is one of the work’s historical lessons, which KABOOM! offers as a way of speaking back to the incomplete story of colonialism. As the gallery is enveloped in an audiovisual landscape that traverses memory and narrative, our understanding of history is revealed to be a fragmented relationship to the past. We are brought into contact with our unknowing, both of this history and of the many other histories deliberately erased or not yet acknowledged. KABOOM! implores us to understand the conditions that lead to this erasure and opens up an acknowledgement of our complicities in such silences as a necessary step toward filling gaps in the historical record. 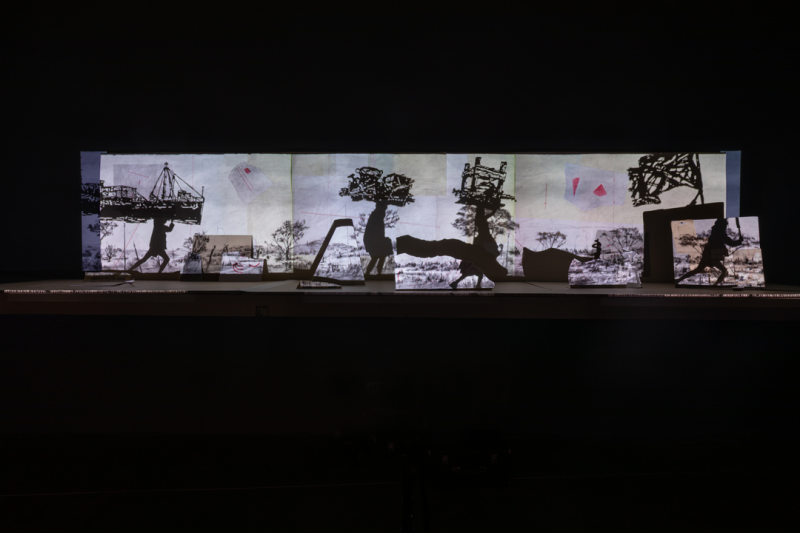 With thanks to Anni Pullagura and Juan Omar Rodriguez for their insightful comments.

[4] W.E. Burghardt Du Bois, “The African Roots of War.” The Atlantic Monthly, 115 (May 1915), 707, http://scua.library.umass.edu/digital/dubois/WarRoots.pdf. Melvin E. Page points out that according to American missionary Dr. James Dexter Taylor, “Africa was at the centre of European hostilities.” Page, “Black Men in a White Men’s War,” 2.

[11] The Head & the Load was presented at the Tate in London and the Park Avenue Armory in New York in 2018. 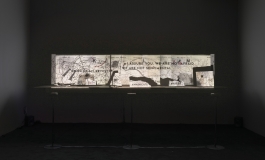