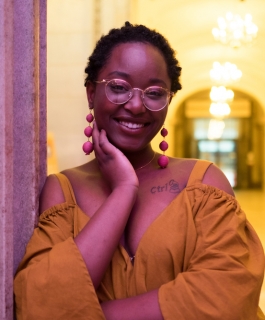 Frazier studied and honed her craft in the highly-regarded Young Chicago Authors program, where she was a member of its most rigorous program for young writers, Louder Than A Bomb Squad. Frazier’s writing addresses the intersections of young, queer, and colored identities living in marginalized areas. Her work has appeared in Breaking the Chains magazine, South Side Weekly, and the anthology Voices of the East Coast. She was also recently profiled by Vogue magazine. Her first poetry chapbook, Graphite, will be released by Haymarket Press this fall. Frazier has performed her work at the Library of Congress and New York’s Federal Hall. Frazier is a member of Assata’s Daughters, an inter-generational grassroots organization of women and femme-identifying people working to deepen, sustain, and escalate the Black Lives Matter movement. She is a Davis-Putter scholar and currently attends Columbia College Chicago, where she is studying Cinema Arts and Sciences.

The National Youth Poet Laureate Program is an initiative of Urban Word, an award-winning youth literary arts and youth development organization, in collaboration with local youth literary arts organizations across the country; and championed by the leading national literary organizations, including the President’s Committee on the Arts & Humanities, the Academy of American Poets, Poetry Society of America, PEN Center USA, Cave Canem, and the Library of Congress.