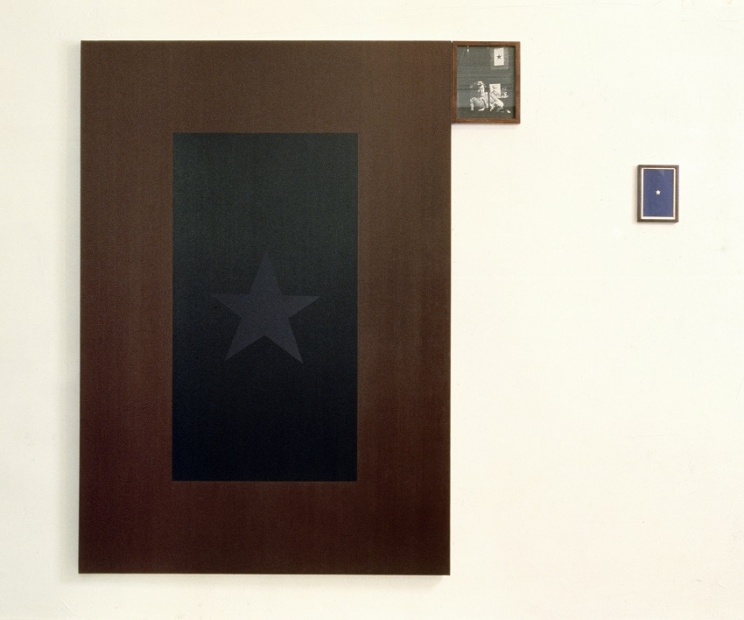 In the 1980s, Annette Lemieux was part of the burgeoning scene of appropriation artists working in New York, including Sarah Charlesworth, Barbara Kruger, David Salle (for whom Lemieux worked as a studio assistant for a time), and Cindy Sherman. Lemieux uses painting, photography, and found-object assemblage to create works that yoke the cultural and the personal. Her work addresses war, time, memory, art-making, and the relationship between personal experience and history.

In Homecoming, Lemieux has compiled a mostly monochromatic assemblage of visual references to mid-twentieth-century wars. A large canvas is painted as a flag, with one gray star centered on black and brown rectangles. A framed black-and-white photograph hanging adjacent to the painting features a middle-aged woman sitting before a framed photograph of a uniformed man. On the wall of her home is a flag very much like the painted one. To the right of these two elements hangs another framed image––a blue sheet with a white star. The title evokes the homecomings everyone has waited for at some point in their lives, and may now remember with nostalgia. But for Lemieux, such wistful images also critique power structures, like those symbolized by flags, and the sacrifices made for the beliefs that the flags represent.

Lemieux is an important Boston-based artist and teacher whose work was featured in a solo exhibition in 1986 at the ICA/Boston, which included Homecoming, the first work by the artist to enter the collection. The work bolsters the museum’s strength in work by women artists, including such painters as Dana Schutz, Amy Sillman, and Charline von Heyl, and enables the museum to tell a fuller story of art in the 1980s and ’90s.