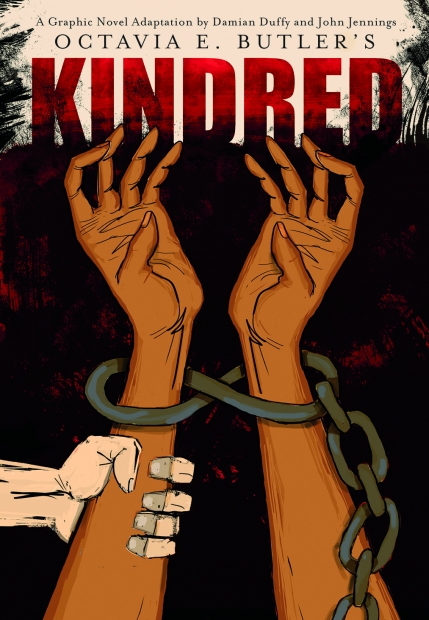 The Institute of Contemporary Art/Boston (ICA) announces its 2017 ICA Reads selection: Damian Duffy and John Jennings’s Kindred: A Graphic Novel Adaptation. The book is an interpretation of Octavia Butler’s bestselling classic that has quickly become a bestseller itself. An artful take on the book club, ICA Reads presents a book of critical and societal importance and an opportunity to gather for discussion and meet the author(s).

More than 35 years after Kindred’s release, the powerful story continues to draw in new readers with its unforgettable strong female protagonist, Dana, and her deep exploration of the violence and loss of humanity caused by slavery in the United States, and its complex and lasting impact on the present day. A unique introduction for those unfamiliar with Butler’s masterful work, adapted by academics and comics artists Duffy and Jennings, the graphic novel powerfully renders her mysterious and moving story, spanning racial and gender divides in the antebellum South through the 20th century. Pulitzer Prize-winning author Junot Díaz describes Kindred: A Graphic Novel Adaptation as, “A glorious tribute to Octavia Butler’s masterpiece. Extraordinary.” For more information visit.

Held up as an essential work in feminist, science-fiction, and fantasy genres, and a cornerstone of the Afrofuturism movement, Kindred has sold more than 500,000 copies. The intersectionality of race, history, and the treatment of women addressed within the original work remain critical topics in contemporary dialogue, both in the classroom and in the public sphere. Frightening, compelling, and richly imagined, Kindred offers an unflinching look at our complicated social history, transformed by the graphic novel format into a visually stunning work for a new generation of readers.

The Artist’s Voice: Damian Duffy and John Jennings, Thursday, May 4, 7 PM
ICA visitors can meet Duffy and Jennings and join a timely and thought-provoking conversation about Kindred and its lasting impact. Book signing to follow (copies available for purchase at the ICA store). Free admission, first come, first served; tickets available at the box office two hours prior to start of program.