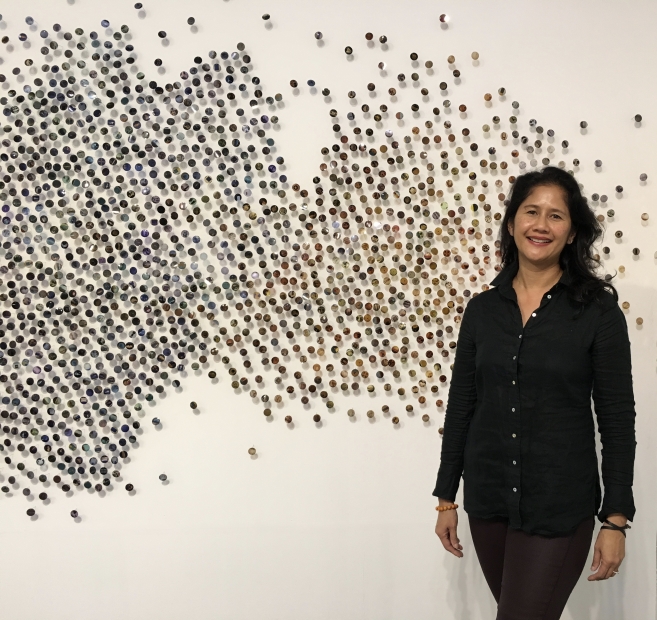 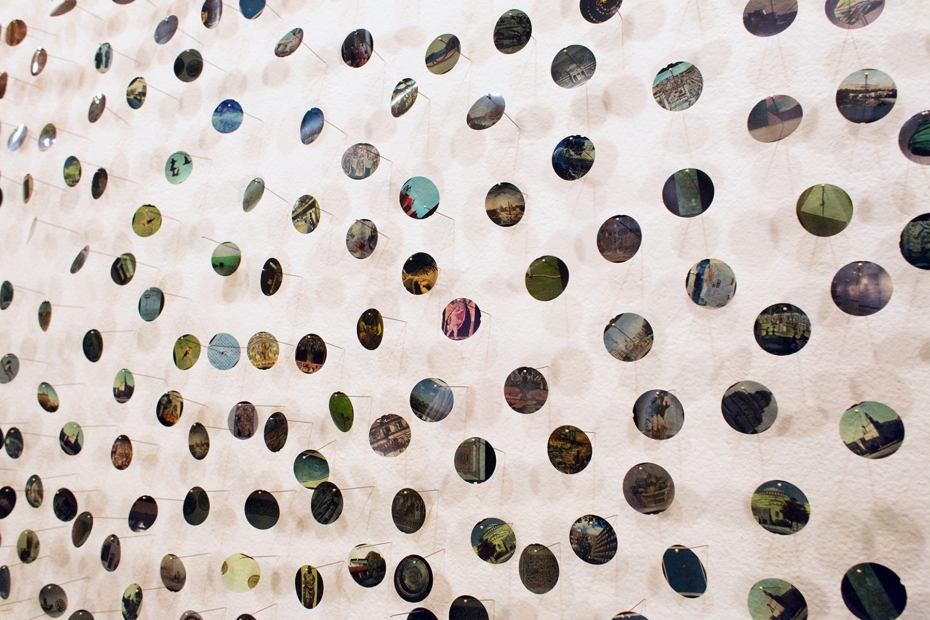 Photo by Juan Madrid, The Center for Photography Woodstock 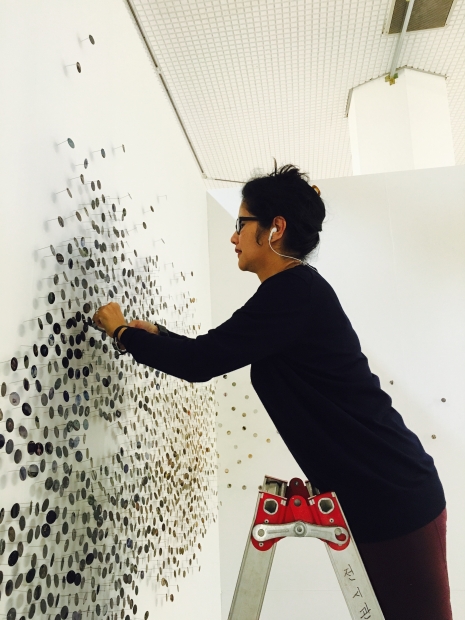 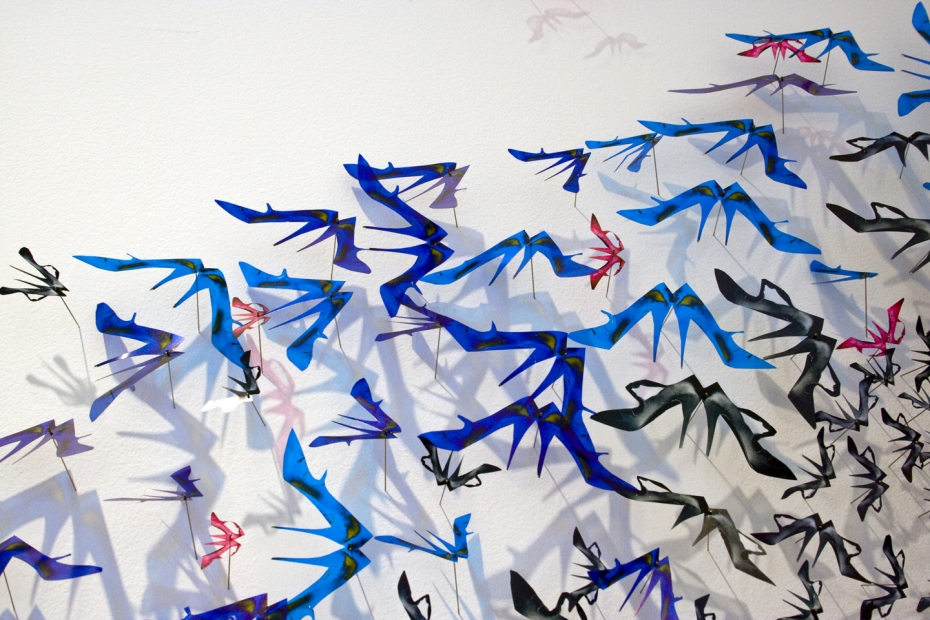 We sat down to talk about the digitalizing of photography, high heels, flying fish, looking with two eyes, air plants, and the journeys we’ve all made to get where we are today.

Houston-based artist and educator Bennie Flores Ansell creates bewitching installations that imitate organic swarms or storms overtaking gallery walls, while making use of discarded slide film, shadow, and hidden imagery only visible up close. This spring, the artist will take over the ICA’s Bank of America Art Lab with an interactive art installation inspired by her relationships to analog photography, current political events, the old trope “a fish out of water,” and her Filipina heritage. We sat down to talk with Ansell about the digitalizing of photography, high heels, flying fish, looking with two eyes, air plants, and the journeys we’ve all made to get where we are today.

You have said that your work is “revealing the photographic object with light.” Could you tell us a little bit about that?

There was an art historian from San Antonio, Frances Colpitt, doing a studio visit with me, and she noticed this image that I had pinned up – these two silhouettes of the backs of high heels. I saw that image on the back of a magazine and I scanned it in, blew it up, and would just look at it. She said, “Something’s happening here. What’s going on there?” And I said, “I don’t know I just liked it. I liked the form, I liked the color, I liked what was going on.” She said “Do something there.” So I started photographing high heel shoes. At the time my daughters were about 5 and 6. I thought about how they would wear my heel heeled shoes, sort of pigeon toed. So I started photographing them that way.  Then when I starting gridding them on the computer, and on the studio wall, they started looking like bugs and butterflies. I thought, “Well let’s print them on transparency film,” and I started making butterfly collections. Then I started installing them by the thousands on the wall.

It started with that project with the butterflies. The photograph is not the thing itself. I think about the evolution of photography a lot in my work, as well as the photographic object and how that’s going away. I am working on a body of work where I’m taking the analog discarded slide film, which is now trash, and I’m deconstructing it. I’m cutting off the sprocket holes on the bottom and the top and then I’m using them in installations on the wall. I’m also stringing them up to mimic compression.

I was thinking about sprockets being obsolete. The purpose of the sprockets was to move film through a camera, and now we don’t need that with digital. So I started cutting them up and blowing them around with a hairdryer, videotaping them, giving them movement again, sort of one last hurrah. It’s sort of sacrilegious for a photographer to touch film, but it feels good. And when I cut the sprocket holes – you can just stick your hands in. It feels nice to just touch them even though you’re not supposed to.

It’s interesting that there’s something on the negative, but then you are creating something very sculptural with them. It definitely invites people to experience the object in two different ways. Being far away and then coming close and observing.

What do you think about the relationship between photography and sculpture?

As a kid I used to love picture books where you could feel things. I think my work is very tactile; I’m a very haptic photographer. I do my work in the dark room, but I also need to something in the studio. I need to touch it, I need to manipulate it. I think installation work has done that for me. I’m able to create this space that gets walked into—something gets seen, and then something else gets seen. I really love that. The object of the photograph is now sculptural in some ways because it exists, it’s not just light on your screen. It’s something that’s out in the world.

As a kid I used to love picture books where you could feel things. I think my work is very tactile; I’m a very haptic photographer.

Tell us about what you’re planning for the Bank of America Art Lab at the ICA.

When I do an installation I have no preconceived idea of what I’m doing to do until I get there and see the lighting and the walls. When Monica Garza, ICA Director of Education, asked me to put a proposal together for this project, she said, “Just think about the word journey,” because of the other shows going on at the time, such as Nari Ward: Sun Splashed. I thought, “Well, the biggest journey I’ve taken in my life was from the Philippines to the United States when I was 6 months old.” I’m still an immigrant, even though I’m as American as anyone else. Thinking about that, and thinking also about everything that’s going on right now in politics, as well as the refugees being displaced, I thought, “Well, they’re sort of like fish out of water.” And then I thought, “There are fish that are comfortable being out of water.” I thought maybe I would do something with that.

The biggest journey I’ve taken in my life was from the Philippines to the United States when I was 6 months old.

I started doing some research and I found out that in the Philippines there a festival called “Bangsi.” That’s the Tagalog word for flying fish. I was thinking about what projects I could do that would be hands on, and whether visitors could make work in a way similar to what I do. Right now, I am making stencils out of wood with a laser cutter, so that kids can hold them and see the shape. There will be three sizes, and from April to September visitors to the ICA will use them to build this swarm. What I want them to do, in terms of thinking about how we’re all immigrants, is to write somewhere on their flying fish where their family first came from. I’m excited to see it take place. We’re also going to put lights on the installation, so shadows will be cast on the wall, which is a big part of my work as well.

What do you think is the role of art and artists during times of political duress?

I think we need to address things. I think we need to say something.  My work has always been about identity politics. I think I feel like I have been somebody of two halves. I look one way. I am the other way. I think about what’s projected onto me, that my English is good, whatever that means. I think that also has to do with all of my work, as well as the projected shadow. There’s a connection always with that too.

What inspires you in your day-to-day life?

I live in a historic home that has been modernized. My husband and I did a renovation of the house and in Houston this is very rare. It was built in 1885 and we did a renovation in 2000. It’s a lot of old and new. Again, the sort of thing with two halves. I love plants, I love flowers. I get a lot of joy from them. I’m into air plants now. It looks like one thing, but it’s something else, and they’re super tactile. So right now I’m getting a lot of joy from my home and my plants. And color. I just love color.

How did you know you wanted to be an artist?

My father is an architect. My mother is a Sunday painter. She is very much into fashion, into color. She would always point out, “look at that red,” or “look at the blue.” So I’ve always been keyed into color. They always took us to art museums, and we always looked at how things were made and designed.

Then I had a boyfriend when I was 19 who saved up money and went to Europe. So when I was 20 I said, “I’m going to do that.” I got a job waiting tables at a restaurant, and I’m glad I did, because I met my husband there. I went to Europe and at the time I thought I was going to be a Mass Communications major. I thought I wanted to be the next Connie Chung. When I was in Florence, I took this picture, I still have it. It’s these green shutters and I think my pink tank top and underwear hanging just drying in the sun, and it was just like, “Wow!” Plus, I was around all of this great art there too. It was hard not to get into that, to be inspired. I got back and took a class in MassComm, and was like “I don’t want to do this,” and I switched my major.

How do you envision younger visitors interacting with your work?

This thing about being an immigrant, how we all came from somewhere else – just to get them thinking about that. The fish out of water, and being or feeling displaced – maybe to think about that as well. I’d also like them to experience seeing the installation at different distances, which is what my work is about.

It’s interesting to think that when they’re writing where their family is from, it might bring out important or compelling conversations and stories.

They should ask. They should know that. Even if they’re 5 or 6, they should know where grandma and grandpa came from. They’re interested if you give it to them. They have an opinion. They are very conscientious about what is going on in the world.