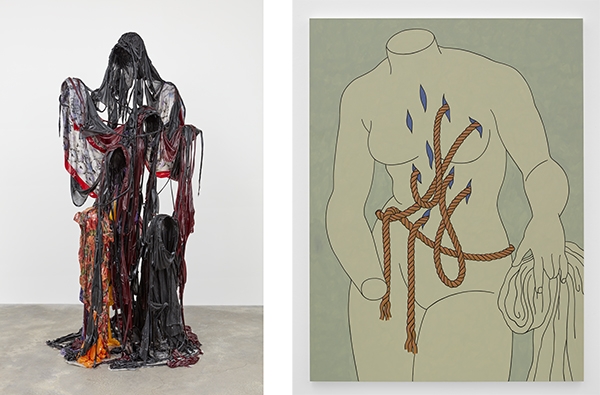 Two New Exhibitions Open May 9 at the ICA: Kevin Beasley and Caitlin Keogh

On May 9, the Institute of Contemporary Art/Boston (ICA) opens solo exhibitions of Kevin Beasley and Caitlin Keogh, offering a closer look at the work of these important emerging artists.

Kevin Beasley
May 9 – August 26
One of the most exciting artists to emerge in recent years, New York–based Kevin Beasley (b. 1985, Lynchburg, VA) uniquely combines sound and clothing—his core artistic materials—in stunning, densely packed sculptures and immersive acoustic experiences. Kevin Beasley, the largest museum exhibition to date of his artwork, will present a selection of sculptures made over the past five years. The exhibition is organized by Ruth Erickson, Mannion Family Curator, with Jeffrey De Blois, Assistant Curator.

“Beasley carries forward strong threads of appropriation and improvisation developed in the practices of artists such as Noah Purifoy and David Hammons,” says Erickson. “Like these artists, the importance of personal memory and lived experience intersects with broader examinations of power and race in America.”

Beasley’s early works harnessed the physical qualities of sound, deploying vibrations and echoes that penetrate the bodies of both performers and audience. He has embedded microphones and other electronic musical equipment in sculptures made of sneakers and foam, manipulating their sonic possibilities in his live performances. Objects and clothing, often the artist’s own, are central in Beasley’s diverse sculptural work, ranging from compositions of shredded t-shirts and hoodies to fitted hats, du-rags, and basketball jerseys.

More recent works are constructed from colorfully patterned housedresses stiffened with resin that stand on the floor and protrude from the walls. Appearing like satellite dishes or clusters of ghostly figures, these works become conduits for absent bodies and histories that the artist evokes through color, pattern, and texture. Rather than contrasting the materiality of objects to the immateriality of music and performance, as is so often the case, Beasley forges strong affinities between the physical and the aural in his multidisciplinary practice.

Caitlin Keogh: Blank Melody
May 9 – August 26
Caitlin Keogh: Blank Melody is the first in-depth solo museum presentation of New York–based artist Caitlin Keogh (b. 1982, Anchorage, Alaska) and will feature an all-new body of work. Keogh’s work considers the history of gender and representation, the articulation of personal style, and the construction of artistic identity. Her vivid, seductive paintings combine the graphic lines of hand-drawn commercial illustration with the bold matte colors of the applied arts to reimagine fragments of female bodies, natural motifs, pattern, and ornamentation. Drawing from clothing design, illustration, and interior decoration as much as art history, Keogh’s large-scale canvases dissect elements of representations of femininity with considerable wit, pointing to the underlying conditions of the production of images of women. The exhibition is organized by Jeffrey De Blois, Assistant Curator.

“The fragmented and idealized female body is a loaded political metaphor in Keogh’s figuration, symptomatic of the kinds of violence that too often undergird representations of women,” says De Blois. “Each of her paintings reduces a constellation of references to their simplest form as a self-contained image, in order to emphasize their specific poetic and metaphoric capacities to address such concerns.”

The exhibition takes its title from an interpretive poem written by Charity Coleman for Keogh’s recent artist book Headless Woman with Parrot (2017). “Blank Melody” comes from a line in Virginia Woolf’s experimental novel The Waves (1931), a book comprised of soliloquies spoken by its multiple characters. For the exhibition, Keogh is creating a new body of work—a tight-knit group of paintings, text-based drawings on mirror that use the poem as material, and painted wooden furniture made with the artist Graham Anderson—in response to and in conversation with Coleman’s poem, exploring the interplay between text and its illustrative interpretation.

About Kevin Beasley
Beasley currently lives and works in New York City. He grew up in Virginia and received a B.F.A. from the College for Creative Studies in Detroit in 2007 and an M.F. A. from Yale in 2012. Recent solo exhibitions have been held at kim? Contemporary Art Center, Riga, Latvia (2017); Casey Kaplan, New York (2017); The Hammer Museum, Los Angeles (2017); and the High Line, New York (2015).  He has a forthcoming solo exhibition at the Whitney Museum of American Art in the fall of 2018. In 2016, he completed inHarlem: Kevin Beasley, a year-long public art project through the Studio Museum. He has recently presented performances at CounterCurrent17, in collaboration with Project Row Houses, Houston (2017); and Lincoln Center in New York (2016); and the Renaissance Society at the University of Chicago (2016). His work was included in When the Stars Begin to Fall: Imagination and the American South, which traveled to the ICA/Boston in 2014. His work is in the permanent collections of the Art Institute of Chicago, the Guggenheim Museum, the Museum of Modern Art, New York, the Art Gallery of Ontario, Toronto, and Tate Modern, London.

About the ICA
An influential forum for multi-disciplinary arts, the Institute of Contemporary Art/Boston has been at the leading edge of art in Boston for 80 years. Like its iconic building on Boston’s waterfront, the ICA offers new ways of engaging with the world around us. Its exhibitions and programs provide access to contemporary art, artists, and the creative process, inviting audiences of all ages and backgrounds to participate in the excitement of new art and ideas. The ICA, located at 25 Harbor Shore Drive, is open Tuesday and Wednesday, 10 AM–5 PM; Thursday and Friday, 10 AM–9 PM (1st Friday of every month, 10 AM–5 PM); and Saturday and Sunday, 10 AM–5 PM. Admission is $15 adults, $13 seniors and $10 students, and free for members and children 17 and under. Free admission for families at ICA Play Dates (2 adults + children 12 and under) on last Saturday of the month. For more information, call 617-478-3100 or visit our website at www.icaboston.org. Follow the ICA at Facebook, Twitter, and Instagram.