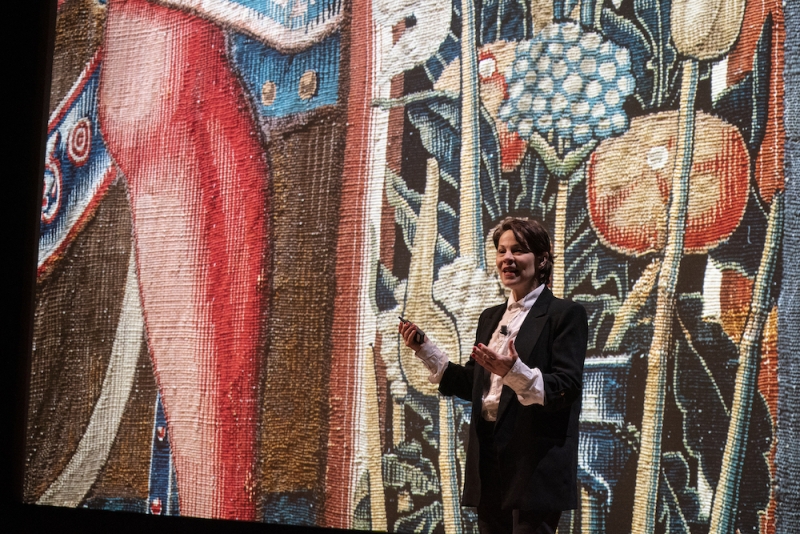 This subversive performance by conceptual artist Suzanne Bocanegra masquerades as an artist talk but reveals her current fixation—and aesthetic engagement with—one of the Metropolitan Museum of Art’s greatest tapestries, the colossal Honor (from the series The Honors), measuring almost 19 by 25 feet. Weaving Bocanegra’s personal narrative with an artist’s interpretation of the 16th century tapestry which reveals a multitude of different characters and narratives, Honor features celebrated film and theater actor Lili Taylor in the title role of “The Artist” and the Lorelei Ensemble.

Suzanne Bocanegra (Writer/Creator) is a visual artist living and working in New York. Bocanegra’s Artist Lecture performances have been presented in museums, galleries, and theaters across the United States, including the Museum of Modern Art, the Hammer Museum, the Pulitzer Foundation, the Houston Museum of Fine Arts, the Carnegie Museum of Art, and on the Next Wave Festival at the Brooklyn Academy of Music. Bocanegra is the recipient of numerous awards, including grants from the Guggenheim Foundation and the American Academy of Arts and Letters. In 2020 she received the Robert Rauschenberg Award from the Foundation for Contemporary Arts. In 2019, a major show of Bocanegra’s work titled Poorly Watched Girls was presented at the Fabric Workshop and Museum in Philadelphia. Also in 2019, her solo show Wardrobe Test was the inaugural exhibition at ART CAKE, an exhibition space in Brooklyn. Her work is in the collections of the Guggenheim Museum and the Museum of Modern Art, among others.

Lili Taylor (Performer). Honor marks the fourth Artist Lecture Lili has worked on with Suzanne Bocanegra. Lili and Suzanne have been performing When a Priest Marries a Witch, BodyCast, and Farmhouse / Whorehouse over the years in many different venues across the US ranging from the Brooklyn Academy of Music, The Wexner Center, The Contemporary Art Museum St. Louis, to name a few.

Honor, an Artist Lecture by Suzanne Bocanegra, was commissioned in part by UCLA’s Center for the Art of Performance, which also hosted a creative development residency in November 2019.