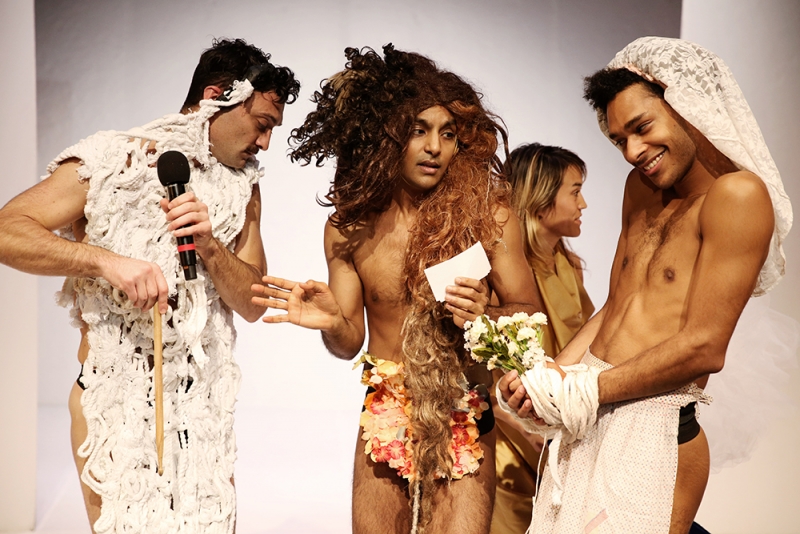 The Institute of Contemporary Art/Boston (ICA) presents inspiring performances and compelling artist talks as part of its upcoming season.

All events take place in the Barbara Lee Family Foundation Theater at the ICA, 25 Harbor Shore Drive, Boston. Ticketed programs go on sale to ICA members on July 25 and to the general public on July 27. Tickets can be purchased at www.icaboston.org or by calling 617-478-3103.

SUN, OCT 1 | 7:30 PM
Zola Jesus
$20 for ICA members + students / $22 for nonmembers
Nika Roza Danilova has been recording music as Zola Jesus for over a decade. Her most recent music was written in pure catharsis, and as a result, the songs are heavy, dark, and exploratory. Danilova has crafted a profound meditation on loss and reconciliation that speaks of tragedy with wisdom and clarity. Returning to the ICA, Danilova’s live performance will plumb the dark depths of her past, but reflect on the light of new beginnings. Opening set by John Wiese.

THU, OCT 12 | 8:00 PM
Mr. Harrison’s Gamelans featuring Johnny Gandelsman, Sarah Cahill, and Gamelan Galak Tika
Performing Suite for Violin and American Gamelan, Concerto for Piano with Javanese Gamelan, and By the Numbers
$15 for ICA members + students / $25 for nonmembers
The ICA and MIT present a centennial celebration of composer Lou Harrison. MIT’s Gamelan Galak Tika joins forces with violinist Johnny Gandelsman and pianist Sarah Cahill to present a program of Harrison’s groundbreaking works for gamelan and western instruments, performed on two gamelans built by the composer and William Colvig and curated by Jody Diamond. The concert will also feature the world premiere of composer and MIT Professor Evan Ziporyn’s “By the Numbers,” an homage to Harrison for violin and re-tuned piano.

SUN, OCT 22 | 3 PM
Arditti Quartet
$15 for ICA members + students / $20 for nonmembers
“The world’s pre-eminent contemporary music quartet” (The Guardian), the acclaimed Arditti Quartet returns to the ICA in collaboration with the Boston University Center for New Music. Founded in 1974 by Irvine Arditti, the quartet’s concerts and albums of 20th- and 21st-century music have been praised for their technical expertise and spirited interpretations. At the ICA, the Arditti Quartet will perform a concert of prominent 21st-century female composers.
Program:
Liza Lim, Hell
Clara Iannota, Dead wasps in the jam jar
Rebecca Saunders, Fletch interval
Hilda Paredes, Bitacora Capilar
Olga Neuwirth, In the realms of the unreal

SUN, DEC 3 | 7:30 PM
Emily Haines and the Soft Skeleton
$28 for ICA members + students / $33 for nonmembers
Emily Haines, lead vocalist and songwriter of the band Metric and a member of Broken Social Scene, brings her solo project Soft Skeleton to the ICA for an intimate concert event. Haines is touring in support of her new album Choir of the Mind, her first solo release in a decade. Her distinctive vocals are the focal point of her new songs, which she uses to create spellbinding orchestrations for an effect that is subtle, ghostly, lush, and deeply powerful.

FRI, OCT 20 | 8 PM
SAT, OCT 21 | 2 PM + 8 PM
Faye Driscoll
Thank You For Coming: Play
$15 for ICA members + students / $25 nonmembers
Free pre-performance talks 30 minutes prior to curtain.
Faye Driscoll and company return to the ICA with the second installment of her Thank You For Coming series. Play revisits Driscoll’s ongoing concerns about the experience and performance of self, of being among others and being alone. While the first installment, Attendance, foregrounded movement and the relationship between audience and performers, Play explores our reliance on stories to relate to one another and form our identities as individuals and citizens. Play highlights how language both defines and reduces our lived experiences. Five multitalented and energetic performers ventriloquize, shape-shift, sing, and speak through and for each other in this strange and enthralling collage of gesture, image, voice, and persona.

FRI, DEC 8 + SAT, DEC 9 | 8 PM
SUN, DEC 10 | 2 PM
Pam Tanowitz and Simone Dinnerstein
New Work for Goldberg Variations
$25 for ICA members + students / $35 nonmembers
Free pre-performance talk 30 minutes prior to curtain.
New Work for Goldberg Variations is an evening-length piece for piano and seven dancers created by classical pianist Simone Dinnerstein and choreographer Pam Tanowitz. Inspired by and set to a live performance of Bach’s iconic and demanding Goldberg Variations, the work is performed by Dinnerstein with Tanowitz’s company, Pam Tanowitz Dance. The artists spent a week in the ICA’s theater this summer developing the work. Dinnerstein, who distinguished herself internationally with her impassioned interpretation of the Variations, brings her nuanced understanding of the demanding score to the project; Tanowitz’s choreography adds a slyly deconstructed classical dance vocabulary to translate Bach’s intricate score into movement.

FRI, MAR 9 + SAT, MAR 10 | 8 PM
Okwui Okpokwasili
Poor People’s TV Room
$15 for ICA members + students / $25 nonmembers
Bessie Award–winning artist Okwui Okpokwasili and director-designer Peter Born use an interdisciplinary approach to examine gender, culture, and identity in the lives of four women. Poor People’s TV Room recovers buried histories and forgotten stories of women’s resistance movements and collective action in Nigeria. This exploration was set in motion by two historical incidents: the Women’s War of 1929, a resistance movement against British colonial powers, and the Boko Haram kidnappings of more than 300 girls in 2014, which launched the Bring Back Our Girls movement.
Through choreography, song, text, and film, Okpokwasili and Born, along with a multigenerational cast of women, craft a performance of haunting intensity and visceral beauty. Poor People’s TV Room plays out like a fever dream, a potent reflection on history’s erasure of female resistance.

FRI, MAY 18 + SAT, MAY 19 | 6:30 PM and 8:30 PM
Ryan McNamara
MEƎM: A Story Ballet About the Internet
$15 for ICA members + students / $25 nonmembers
Through our smartphones and laptops, we now have access to infinite streams of information available in an instant. We can get lost in the internet for hours, clicking through hundreds, if not thousands, of videos, links, and images at a dizzying rate. Visual artist Ryan McNamara reimagines our impulse to click, copy, paste, and share in MEƎM 4 Boston: A Story Ballet About the Internet, an immersive, museum-wide, and unforgettable performance experience. Working with a cast of 13 dancers, McNamara samples and remixes music and movement—from classical ballet to contemporary dance—in an inventively staged physical realization of our virtual experience.

FRI, NOV 17 + SAT, NOV 18 | 8 PM
Lars Jan/Early Morning Opera
The Institute of Memory (TIMe)
$15 for ICA members + students / $25 nonmembers
Called “incendiary with hope…” (Los Angeles Magazine), The Institute of Memory (TIMe) is a multimedia performance about how the future of remembering is currently changing. Two men hunt each other as a kinetic light sculpture hovers and cuts through the air, signaling keystrokes from a hacked 1950s typewriter. Featuring archival wire-tap transcriptions, communist spy missives, and MRI brain scans, TIMe conjures a portrait of director Lars Jan’s enigmatic father — a Cold War operative whose story exhibits how the future of privacy looks dangerously like the darkest era of its past. The son of émigré parents from Afghanistan and Poland, Jan grew up in Cambridge, where his father, Henryk Ryniewicz, moved after World War II to take a position at Harvard’s Kennedy School of Government. Today Lars is a director, writer, visual artist, and the founder of Early Morning Opera, a genre-bending performance and art lab whose works explore emerging technologies.

THU SEP 28 | 7 PM
ICA Forum: Representation and Responsibility in Creative Spaces
Within social, political, and cultural arenas, issues of representation—the act of depicting and/or speaking on behalf of someone—and responsibility have come into even sharper focus in recent months. These issues, surfacing in the commentary surrounding the leadership of the Women’s March, contentious government elections, speeches by literary figures, and calls for the removal of artworks in museums, proliferate news and social media feeds as communities try to make sense of it all in a new era of rapid consumption of information. Within the arts, important questions are being raised, primarily: who gets to represent whom in art? The ICA and Harvard University’s Hutchins Center for African and African American Research invite you to join artists, scholars, and educators in a series of conversations this fall and spring that address ideas of cultural appropriation and creative license in the 21st century.

THU, OCT 5 | 7 PM
The Artist’s Voice: Mark Dion
“He is a genealogist of sorts, tracing the bloodlines of Western intellectual history to ask, among other things, how European colonial expansion, environmental plundering and the creation of the museum all relate to the ecological disasters we face today.” —The New York Times

Artist Mark Dion, whose exhibition Mark Dion: Misadventures of a 21st-Century Naturalist in on view October 4, 2017 through January 1, 2018, takes on art, science, our evolving understanding of the natural world, and his own practice in conversation with Ruth Erickson, Mannion Family Curator at the ICA.

SAT, NOV 4 | 2 PM
The Artist’s Voice: Steve McQueen
“He holds his lens steady to achieve a truer sense of bodies in real time, and to give the viewer no choice but to let their mind unravel the implications behind the images.”  —The Atlantic
Filmmaker and artist Steve McQueen, recipient of both the Academy Award and Turner Prize, will be in conversation with Hamza Walker, Director of LAXART and former curator at the Renaissance Society. McQueen’s Ashes, currently on view at the ICA, is a freestanding video installation that shows a young carefree fisherman and his unexpected fate. McQueen’s upcoming film Widows will be released next fall.

Mark Dion: Misadventures of a 21st-Century Naturalist
OCT 4, 2017 – JAN 1, 2018
The artist’s first U.S. survey examines 30 years of his pioneering inquiries into how we collect, interpret, and display nature. Since the early 1990s, Mark Dion (b. 1961, New Bedford, MA) has forged a unique, interdisciplinary practice by exploring and appropriating scientific methodologies. Often with an edge of irony, humor, and improvisation, Dion deconstructs both scientific and museum-based rituals of collecting and exhibiting objects by critically adopting them into his artistic practice. He has traveled the world to gather plant and animal specimens, conducted archeological digs, and rummaged through forgotten collections, arranging his finds into brimming curiosity cabinets and charismatic sculptures. His projects and exhibitions offer novel approaches to questioning institutional power, which he sees as connected to the control and representation of the natural world.

The Music of Lou Harrison is co-presented with MIT as part of the MIT Sounding concert series.

The Arditti Quartet is co-presented with the Boston University Center for New Music.

Dance UP is presented by

Thank You for Coming: Play is co-commissioned by Summer Stages Dance @ the ICA.  Driscoll and Company were in residence in the Barbara Lee Family Foundation Theater for two weeks in the summer of 2015. The presentation of Thank You For Coming: Play was made possible by the New England Foundation for the Arts’ National Dance Project, with lead funding from the Doris Duke Charitable Foundation and The Andrew W. Mellon Foundation, with additional support from the National Endowment for the Arts.

Anne Myer and Dancers is presented by

The presentation of Poor People’s TV Room was made possible by the New England Foundation for the Arts’ National Dance Project, with lead funding from the Doris Duke Charitable Foundation and The Andrew W. Mellon Foundation, with additional support from the National Endowment for the Arts.

The Institute of Memory (TIMe) is funded in part by the New England Foundation for the Arts’ National Theater Project, with lead funding from The Andrew W. Mellon Foundation.