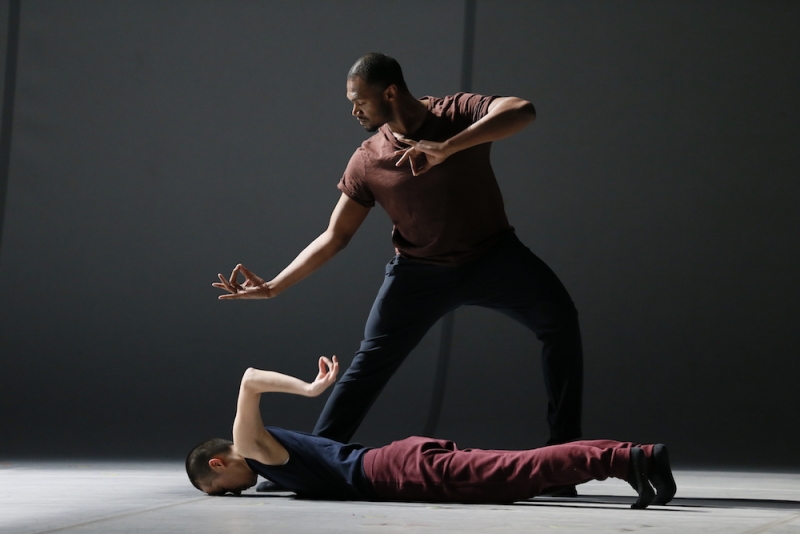 All events take place in the Barbara Lee Family Foundation Theater at the ICA, 25 Harbor Shore Drive, Boston. Tickets can be purchased at www.icaboston.org or by calling 617-478-3103.

Hailed as one of contemporary jazz’s most inventive and innovative performers, pianist and composer Jason Moran’s musical influences range from historical jazz giants like Fats Waller and Thelonious Monk contemporary visual artists like Kara Walker and Glenn Ligon. At the ICA, Moran’s abundant talents will be on full display. The evening opens with a solo piano set, followed by a performance with his trio The Bandwagon, celebrating their 20th anniversary this year. Presented in conjunction with the exhibition Jason Moran, which will be on view in the galleries prior to the performance.

Austrian composer Klaus Lang’s compositions reflect a keen understanding of the musical canon, from early-17th-century composers like Frescobaldi to 20th-century experimentalists like John Cage and Morton Feldman. Catalyzed by history, his compositions conjure a strange and mesmerizing sound world that exists somewhere between the past and the present. At the ICA, two highly acclaimed ensembles will interpret Lang’s music. The percussion and piano quartet Yarn/Wire will perform molten trees (2017), and members of the Boston-based sinfonietta Sound Icon will perform weisse aepfel (2009). Co-presented with the Boston University Center for New Music.

In Abby Zbikowski’s abandoned playground, nine dancers rip through the theater performing complex sequences of hyperphysical dance that push them to the brink of their capabilities and endurance. In this evening length work, Zbikowski highlights each dancer’s unique strengths and forges an intense ensemble connection through vocalizations and the channeling of communal energy. Performing such extreme and virtuosic movement at a relentless pace, the dancers invigorate and push each other to overcome their physical and mental exhaustion. Recognized with the 2017 Juried Bessie Award for her “unique and utterly authentic movement vocabulary in complex and demanding structures,” Abby Zbikowski generates her bold, high-intensity, precisely rhythmic choreography from her background of hip-hop, tap, West African, and postmodern dance styles, deeply-rooted punk aesthetic, and close collaboration with her dancers, who bring their specific bodies, psychologies, and training histories to the work.

In Minimalism and Me legendary artist Twyla Tharp, one of the most acclaimed choreographers of her generation, recollects her early works and experiences, as dancers from Twyla Tharp Dance recreate excerpts from the works she discusses. Accompanied by never-before-seen photographs and original cast films of several of her site-specific and gender-fluid performances, the program illuminates the progression of the Minimalism movement in the 1960s and 1970s and the influence it had on her choreography. The program draws from twenty important works Tharp made between 1965 and 1970 created for different spaces, including museums and the outdoors, and performed in silence. There will be a pre-performance talk by former Tharp dancer Richard Colton 30 minutes before each performance. Minimalism and Me is a Summer Stages Dance @ the ICA/Boston project.

Developed by Bill T. Jones with Associate Artistic Director Janet Wong, Analogy Trilogy is based on oral histories and inspired by W. G. Sebald’s award-winning novel The Emigrants. Part one, Analogy/Dora: Tramontane, recounts the story of Dora Amelan, a French Jewish nurse, social worker, and World War II survivor. Part Two, Analogy/Lance: Pretty aka The Escape Artist is a tragic yet humorous journey through the sex trade and drug use of the 1980s. The final part of the trilogy, Ambros: The Emigrant, tells the story of a German valet and his glamorous travels with his charge Cosmos through Europe and the Middle East on the eve of WWI, and then his life after Cosmo’s descent into madness and death.

Italian visual artist and choreographer Alessandro Sciarroni returns to the ICA with a hypnotic reflection on the passing of time. Working with a cast of four professional jugglers, Sciarroni emphasizes the performers’ discipline, focus, and concentration to thrilling effect. By stripping away the trappings of the circus, Sciarroni illustrates the essential elements of juggling and the medium’s nearly endless combination of patterns and tosses. Every toss and every catch marks the passage of time—a hypnotic and thrilling effect—again and again and again.

Boston-born choreographer Will Rawls returns for a performance collaboration with MacArthur Fellow Claudia Rankine and filmmaker John Lucas. What Remains is an investigation of cultural violence and disappearance through movement, language, installation, and projection. Inspired by Rankine’s texts on racial violence—Citizen and Don’t Let Me Be Lonely—What Remains explores hidden histories, broken tongues, and premature death in the lives of African Americans. Featuring performers Jeremy Toussaint-Baptiste, Leslie Cuyjet, Jessica Pretty, and Tara Aisha Willis. What Remains is a Summer Stages Dance @ the ICA/Boston project.

Black Radical Imagination is an international touring program of moving image shorts that highlights new stories by filmmakers and visual artists from within the African diaspora. This year’s program, FUGITIVE TRAJECTORIES, meditates on the various ways Black people are tending to their lives despite traumatic histories, both personal and collective, and a troubling present. Black Radical Imagination is cofounded by Erin Christovale and Amir George, and the 2018 program is curated by Jheanelle Brown and Darol Olu Kae. Participating artists include Ephraim Asili, Frances Bodomo, Alima Lee, Jenn Nkiru, Amelia Umuhire, and dana washington. Jheanelle Brown will be in attendance.

The death of Michael Brown, shot by a Ferguson, Missouri police officer in 2014, was national news after protests erupted there. But the history of Ferguson, a formerly whites-only “sundown town,” and the neighboring black town of Kinloch, now semi-abandoned, is not well known. Incorporating reflections of residents of Kinloch and Ferguson (including Gillooly, who grew up in Ferguson), this film explores the relationship between these two towns. Beginning with a 1960s roadblock that divided then-white Ferguson from black Kinloch, the film depicts a micro-history of race relations in America. Filmmakers Jane Gillooly, Khary Saeed Jones, Aparna Agrawal, in attendance.

Exhibiting artist Dindga McCannon visits the ICA for the closing week of the exhibition We Wanted A Revolution. McCannon, who is an author, illustrator, painter, and more, actively participated in critical moments in the history of art, including as a member of the Weisui Artist Collective in the 1960s and the Where We At collective composed of professional women of color who supported one another’s creative careers in the 1970s. Join McCannon as she recalls her earlier years as an artist in New York, her many subsequent accomplishments as an artist, and her active involvement in this expansive touring exhibition that recognizes the many important contributions of women of color from the 1960s to 80s.

Ten years ago, Jason Moran created the soundtrack for Glenn Ligon’s The Death of Tom, an abstractionist recreation of the final scene of the 1903 silent film Uncle Tom’s Cabin, based on the novel by Harriet Beecher Stowe. Join the artists in revisiting this important collaboration with a screening and live performance, and hear more about Moran’s expansive creative practice and his first touring exhibition in a conversation led by Ligon.

William Forsythe is counted among the foremost choreographers of our time. Parallel to his stage productions, Forsythe has developed installations, sculptures, and films that he calls Choreographic Objects. In this public program, Forsythe will be in conversation with Barbara Lee Chief Curator Eva Respini about his artistic practice, choreographic objects, physical thinking, and problem solving in his work.

The first museum presentation of interdisciplinary artist Jason Moran features the full range of Moran’s work from performance and collaborations with visual artists to his own sculptural works. Moran, who has taught at the New England Conservatory of Music in Boston since 2010, is known for using personal experience to create dynamic musical compositions that challenge the conventional form of the medium. His experimental approach to artmaking embraces the intersection of objects and sound, pushing beyond the traditional staged concert or sculpture and drawing to amplify ways that both are inherently theatrical. In-gallery musical performances, activating the sculptures, will be orchestrated during the run of the show. Jason Moran is organized by the Walker Art Center; the Boston presentation is organized by Jeffrey De Blois, Assistant Curator.

The ICA presents the first comprehensive U.S. exhibition of celebrated artist and world-renowned choreographer William Forsythe. Spanning over two decades of Forsythe’s work, this major exhibition includes room-size interactive sculptures, participatory objects, and video installations. Since the 1990s, parallel to his stage productions, Forsythe has developed site-responsive, interactive works that are designed to stimulate movement and invite the viewer to confront and engage with the fundamental principles of choreography. Forsythe calls these works Choreographic Objects. Via the artist’s instructions for action posted on the wall next to the works, visitors are encouraged to move freely through the performative exhibition and generate an infinite range of individual choreographies. In shifting choreographic thinking from the trained dancer to the layperson, and from the stage to the gallery, Forsythe emphasizes that choreography is possible everywhere. This exhibition is organized by Eva Respini, Barbara Lee Chief Curator, with Jeffrey De Blois, Assistant Curator.

Support for the ICA’s 2018–19 Performance Season is provided by Vivien and Alan Hassenfeld and Ellen Poss.

The ICA’s presentation of Twyla Tharp: Minimalism and Me is made possible, in part, with the generous support of George and Ann Colony.

Minimalism and Me and What Remains are Summer Stages Dance @ the ICA/Boston projects and are made possible, in part, with the support of Jane Karol and Howard Cooper, David Parker, The Aliad Fund, George and Ann Colony, and Stephanie and Leander McCormick-Goodhart.

Additional support for Will Rawls’s residency comes from the American Repertory Theater.

We Wanted a Revolution: Black Radical Women, 1965–85 is organized by the Brooklyn  Museum. Support for the Boston presentation is provided by The Robert E. Davoli and Eileen L. McDonagh Charitable Foundation, Fotene Demoulas and Tom Coté, Allison and EdwardJohnson, Barbara Lee, David and Leslie Puth, and Charles and Fran Rodgers.

Jason Moran is organized by the Walker Art Center, Minneapolis and is made possible with generous support from the Andrew W. Mellon Foundation, the National Endowment for the Arts, and the William and Nadine McGuire Commissioning Fund. Additional support provided by Mike and Elizabeth Sweeney. Piano by Steinway & Sons.

Additional support is generously provided by Edward Berman and Kathleen McDonough and Paul and Catherine Buttenwieser.